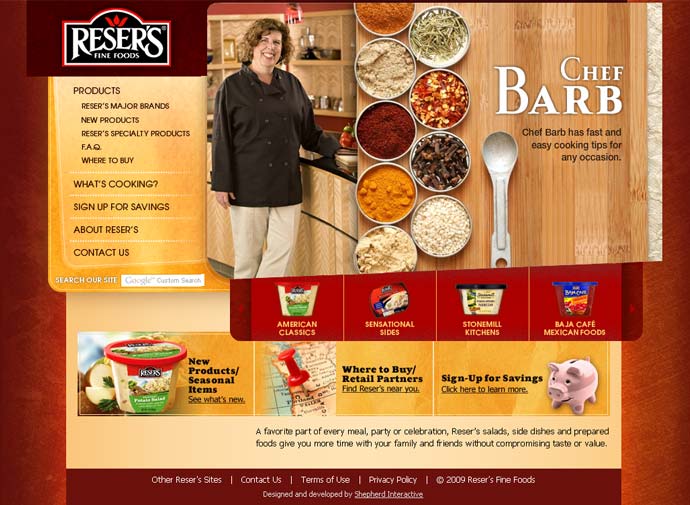 Another site from Weston Ruter at Shepherd Interactive. Uses new html5 elements for the header, footer, articles and asides.

Thanks for the post. HTML5 Forms are also utilized (see Contact Form’s use of input@type, @required, @pattern, etc.): http://www.resers.com/contact-us/form/

Spelling tweak in the note for “Shepherd”.

Sorry what is HTML5 about this site? It fails on an extremely huge level.

An that contains a flash element (what, no ?) which isn’t semantic usage at all, and a NS declaration of http://www.w3.org/1999/xhtml.

That middle sentence has scraped out the HTML tags, and should have read..

An ASIDE tag that contains a flash element (what, no CANVAS tag?) which isn’t semantic usage at all, and a NS declaration of http://www.w3.org/1999/xhtml.

This specification is intended to replace XHTML 1.0 as the normative definition of the XML serialization of the HTML vocabulary

The second concrete syntax uses XML, and is known as “XHTML5”.

How is the aside usage non-semantic? It contains the WordPress sidebar widgets; the Flash also has fallback content for accessibility and SEO. The use of Flash is not contra HTML5 since it specifies the object element for this very purpose. Regardless of my feelings toward Flash, it is a core technology used in the Web; as much as I wish otherwise, Canvas does not yet have the browser support (IE8) or tools (Adobe Flash) to make it an alternative.

Furthermore, XHTML5 has a number of advantages over HTML, including the ability to utilize XMLHttpRequest.responseXML, embed SVG and MathML inline, and it solves a Firefox 2 parsing bug.

Sorry what is HTML5 about this site? It fails on an extremely huge level.

I’m sorry but I can’t see how your anonymous claim is either true or constructive.

Got something constructive to say? Cancel reply

Looking for a job?

Have a look at our sister site, HTML5 Doctor for news, views and tutorials about HTML5. With articles by Bruce Lawson, Remy Sharp and more.